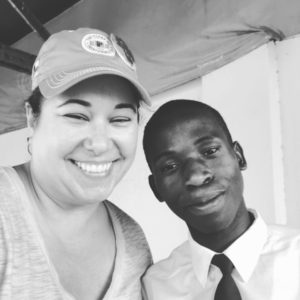 On July 9th a text was sent that said, “Hey Mom and Dad! I just met your grandson.” Despite the time difference, a response was quickly received, “You have some explaining to do…”  This exchange with my parents made me laugh and is only one of the many memorable things about that particular Monday.

For the past five years, I have been the “American Mom” to Ssenjala Andrew.  Andrew is a bright, kind, soft-spoken 20-year-old whom I have supported through OHU.  A few years ago, there was the potential opportunity to go to Uganda and meet Andrew. That trip did not materialize and Andrew’s letter brought tears to my eyes when he expressed how disappointed he was to not have met.  When the opportunity to travel to Uganda this past July presented itself, I couldn’t say no.

Meeting Andrew was the highlight of my trip.  When we first met, I was nervous and didn’t know what to say, do or expect.  I’m not a shy person, but what are one’s first words when you meet someone that you have a unique bond with, but have only interacted with over a few snail mail letters.

We hugged and chatted for a bit.  Andrew shared that he would be taking his university exams in the fall and hoped to start his studies at Makerere University in 2019.  I told him how proud I was of him and that I would continue to support him.  We continued to talk, but I kept noticing a table of boys about Andrew’s age watching us. These were Andrew’s friends that he hadn’t seen in a long time since they went to different schools around Mityana. I didn’t want to be the “hovering parent” so I told him to catch-up with the boys and that I would bring over some snacks.  He quickly gave me a hug and was off.

As the morning progressed, I continued to watch Andrew in his element, smiling, sharing some Pringles and laughing with his friends.  This made me think about when I was young and just wanted my parents to leave me alone so that I could hang out with friends.  I gave him that space, but every now and again we would make eye contact and Andrew would flash his beautiful smile and my heart would melt. I knew that meeting Andrew and having those moments would be treasures that I would have for a life time.